Why can rugged tablet EM-I12U play a key role in industrial manufacturing?

With the changes in people's material living standards and economic level, the competition in the industry has also transformed from the original traditional sector to the technology industry. Even conventional industrial production and assembly line operations have entered the intelligent mode, which shows efficiency and quality. Price data has been placed in front of every industry.

Digital transformation means enterprises will abandon the original manual and traditional production equipment applications and use PDAs, code scanners, industrial tablets, and other handheld terminal equipment to extract research, test, and transmit data in the production workshop. The arrival has ended the original significant labor cost, which can improve transmission speed, reduce errors, improve product quality, and the overall industrial production to a high standard state.

But this is only the beginning of the digital transformation. With the continuous improvement of science and technology, more and more multi-functional types of terminals have come to people. Moreover, enterprises have also proposed different industry applications, application scenarios, and industrial performance of terminals. Therefore, requirements and the customization service of the EM-I12U rugged tablet terminal are generated. 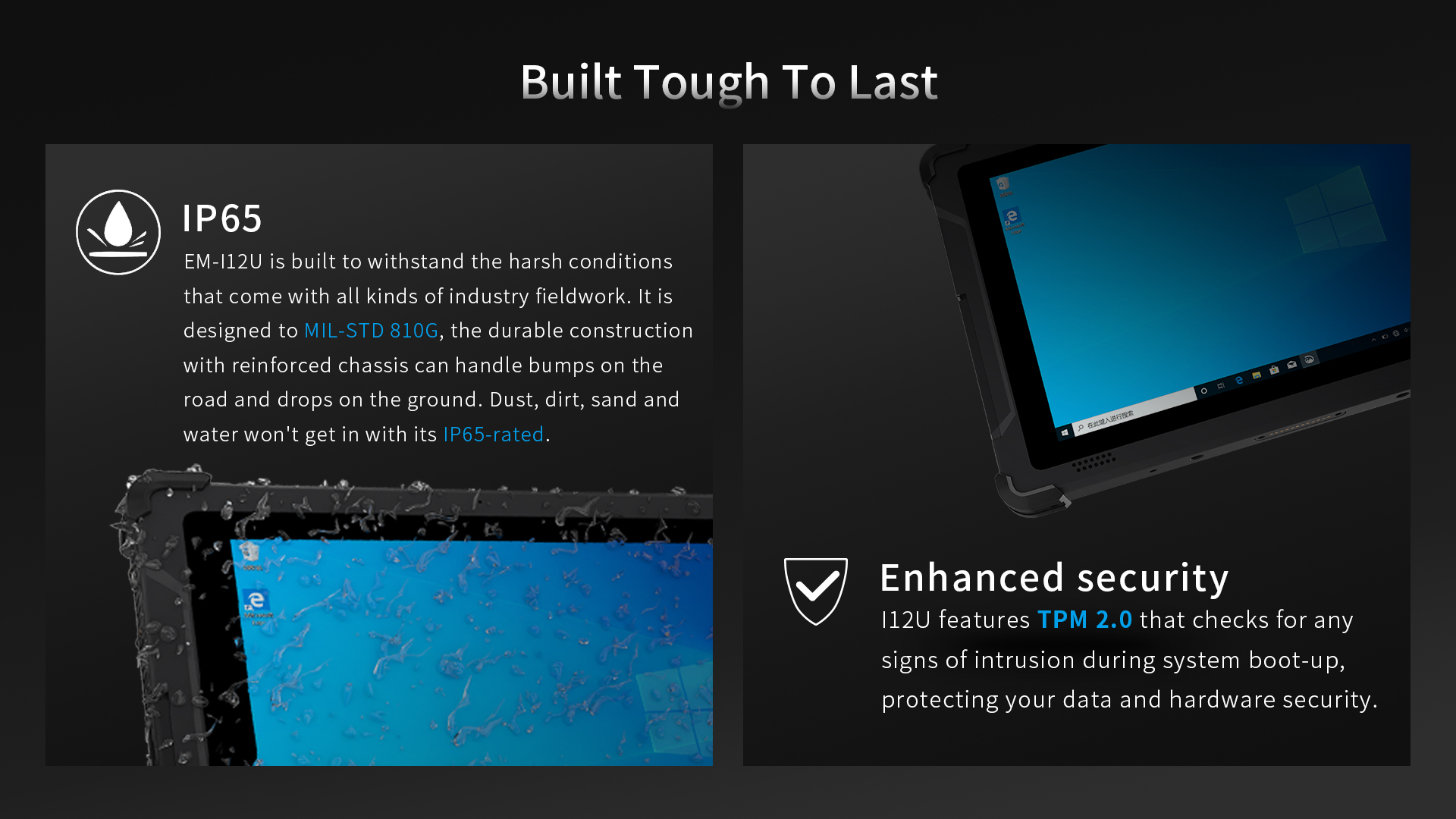 What decisive role does the EM-I12U rugged tablet terminal play?

The EM-I12U reinforced tablet terminal can better control and synchronize information in industrial production, complete quality inspection, and management in the manufacture of one piece of products, and make unified orders, production plans, production equipment, and quality monitoring. Control and real-time output, the staff in the factory do not need to check each link one by one but make judgments by watching the data displayed on the screen of the EM-I12U reinforced tablet terminal.

One screen can display content at all levels on a split-screen, and there will be no more problems with the help of the EM-I12U reinforced tablet terminal.

2. The switching ability of various application scenarios determines the upper limit of the terminal

It can be switched freely in various application scenarios such as production workshops, warehouses, logistics, and transportation. The application of EM-I12U reinforced tablet terminal in the industrial industry is not limited to one design but can be used in different scenarios. The combined application of each terminal achieves stable switching of systems. It visualizes the perspectives and data in different scenarios, which speeds up the development of the entire production chain, sales chain, and operation chain.

3. Performance and quality determine the choice of an enterprise

The industrial three-proof performance on the EM-I12U reinforced tablet terminal has a solid appearance and three-proof skills, including waterproof, dustproof, and shockproof effects. Vibration and other control tests are still stable and reliable in a variety of harsh environments.

An active cooling system is set up in the internal structure design, and the cooling effect of large-area fans, air outlets, and heat pipes is imminent. At the same time, the magnesium alloy body considers the thermal conductivity materials to ensure high performance and continuous operation. Disassemble the waterproof structure to isolate the inside of the fuselage to the independent cavity connection to achieve waterproof and moisture-proof inside the fuselage.

The emergence of the EM-I12U rugged tablet terminal has helped people decide to introduce it. More and more companies have released information that they will submit this new rugged tablet terminal, which is a good signal, indicating that it will affect productivity in future industrial production and operation. Quality and efficiency problems will disappear.

Related News
Emdoor Info industrial control products become a stable partner for new infrastructure
A Purchase Guide to the Industrial Tablet PC
What Are the Core Advantages of the Mini Industrial PCs?
Products